There are four main categories of soup: Thin, Thick, Cold and National. These types of soup are widely recognised in today’s modern kitchen.
These categories cover multiple different types of soup, including clear soups such as consommé, bouillon and broth and thick soups including purees, velouté and cream soup, such as the classic Campbell’s range.

What are Thin Soups?

Thin soups are delicate soups with no thickening agent in them.

Thin soups can be further split into more categories, including clear, broth, bouillon and chunky. 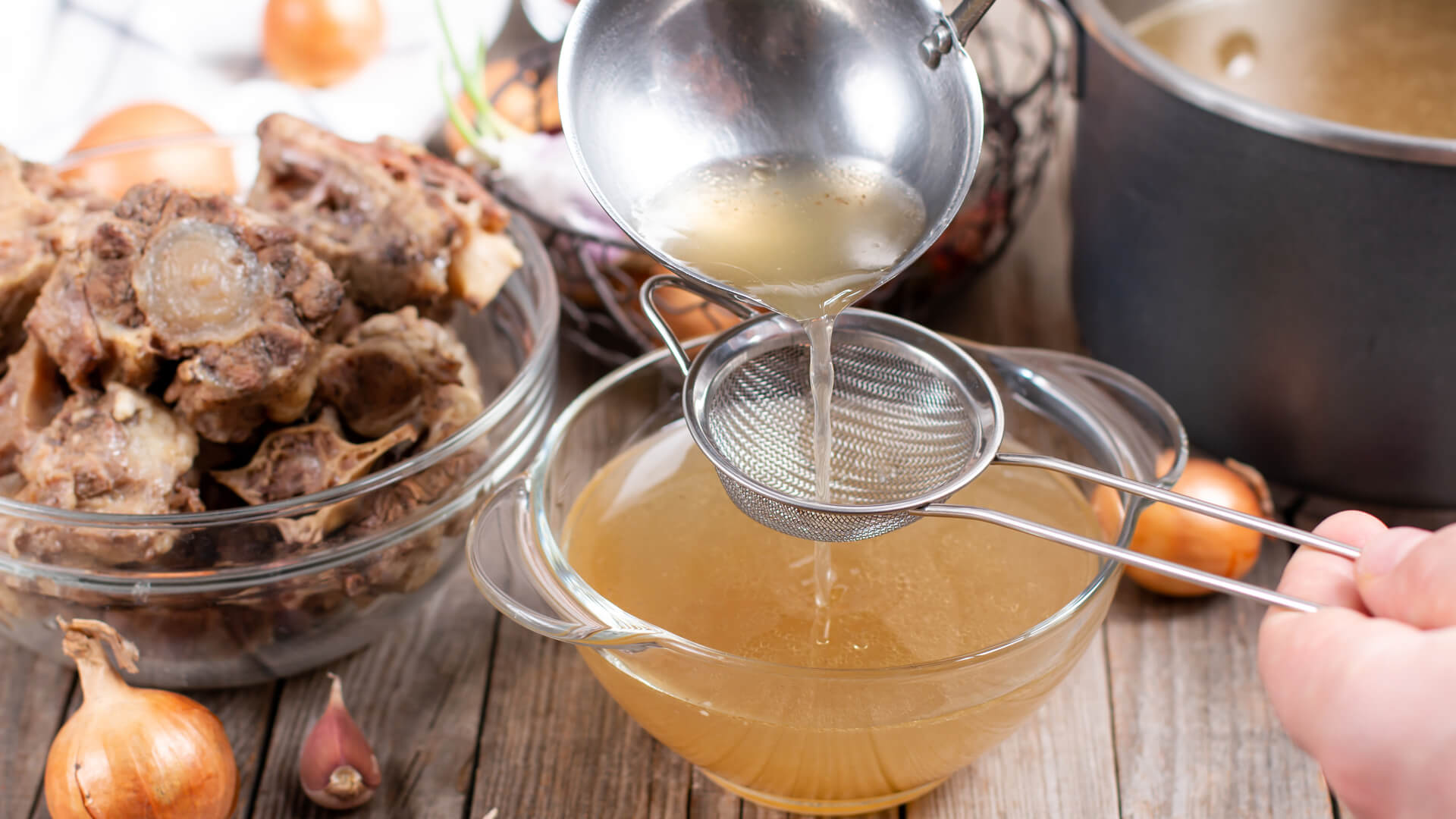 Clear soups are a type of thin soup. Clear soups are also called passed soups, as any chunks of ingredients are taken out of the soup, and you are left with a liquid soup. Consommé, a French clarified meat or fish broth, is a classic version of a clear soup.

Clear soup can offer a wide range of nutritional benefits while keeping your digestive tract clear. This is why clear soup is so popular in hospitals or as food when you’re feeling under the weather. 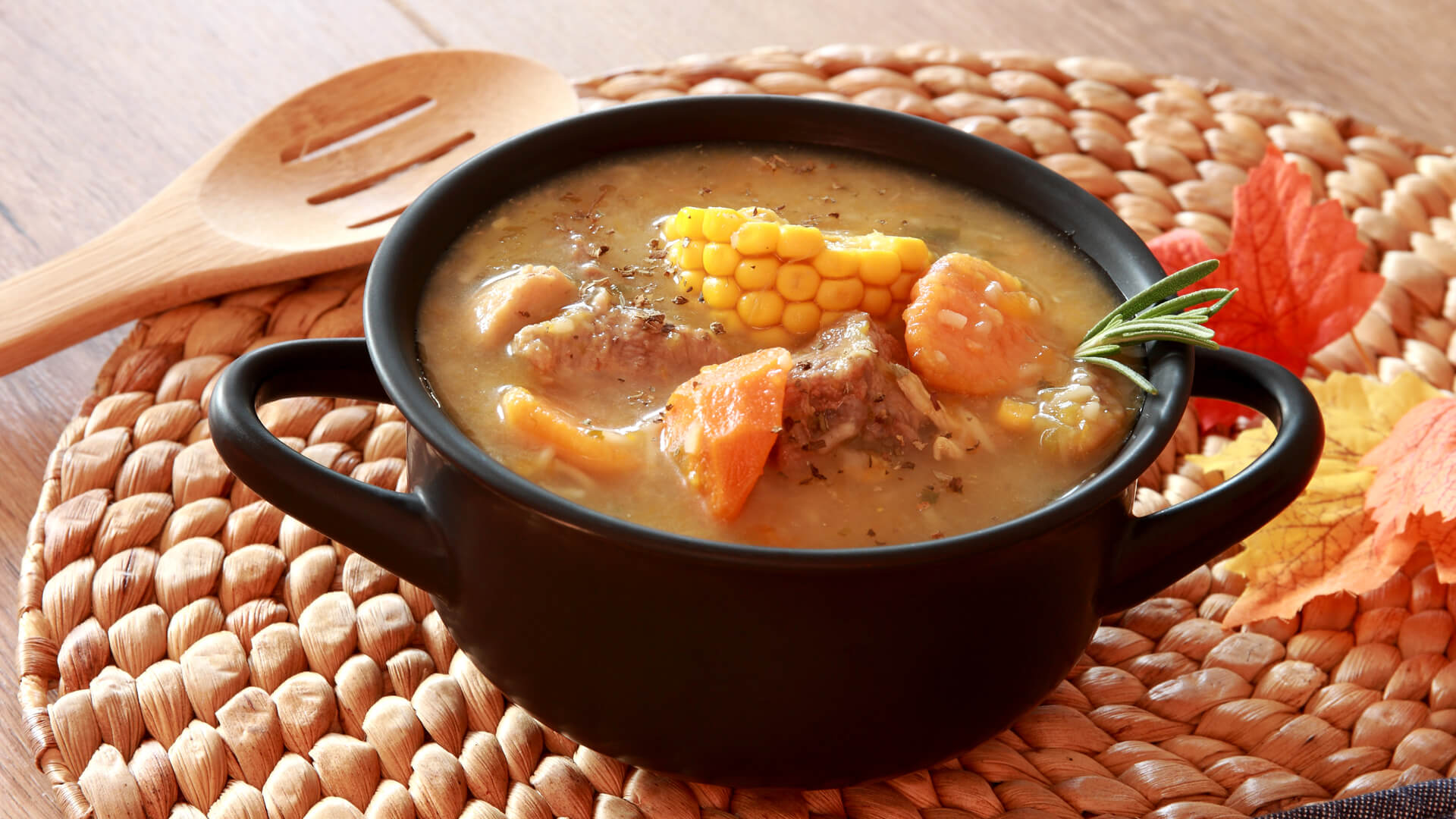 Broth, or bouillon, is a common clear soup. Broths come in a variety of flavours, including chicken, turkey, beef, vegetable and mushroom.

Bouillon can also come in a powdered form, and stock cubes are a famous example of a powdered broth or bouillon base.

Many cooks and writers treat bouillon and broth interchangeably. This is understandable because they are essentially the same thing: a soup made from water in which bones, meat, fish or vegetables have been simmered.

Leave broth to simmer for long enough and the gelatine begins to thicken it, creating an intensely flavourful stock.

A consommé is made by adding a mixture of ground meats, together with mirepoix (a combination of carrots, celery, and onion), tomatoes, and egg whites into either bouillon or stock.

The secret to making a high-quality consommé is in the simmering. Simmering and stirring bring impurities to the surface, which are further drawn out due to the presence of acid from the tomatoes.

Eventually, the solids begin to congeal at the surface of the liquid, forming a “raft”, which is caused by the proteins in the egg whites. The resulting concoction is a clear liquid that has either a rich amber or yellow colour. It is carefully passed through a filter to ensure its purity and then the fat is skimmed from the surface. 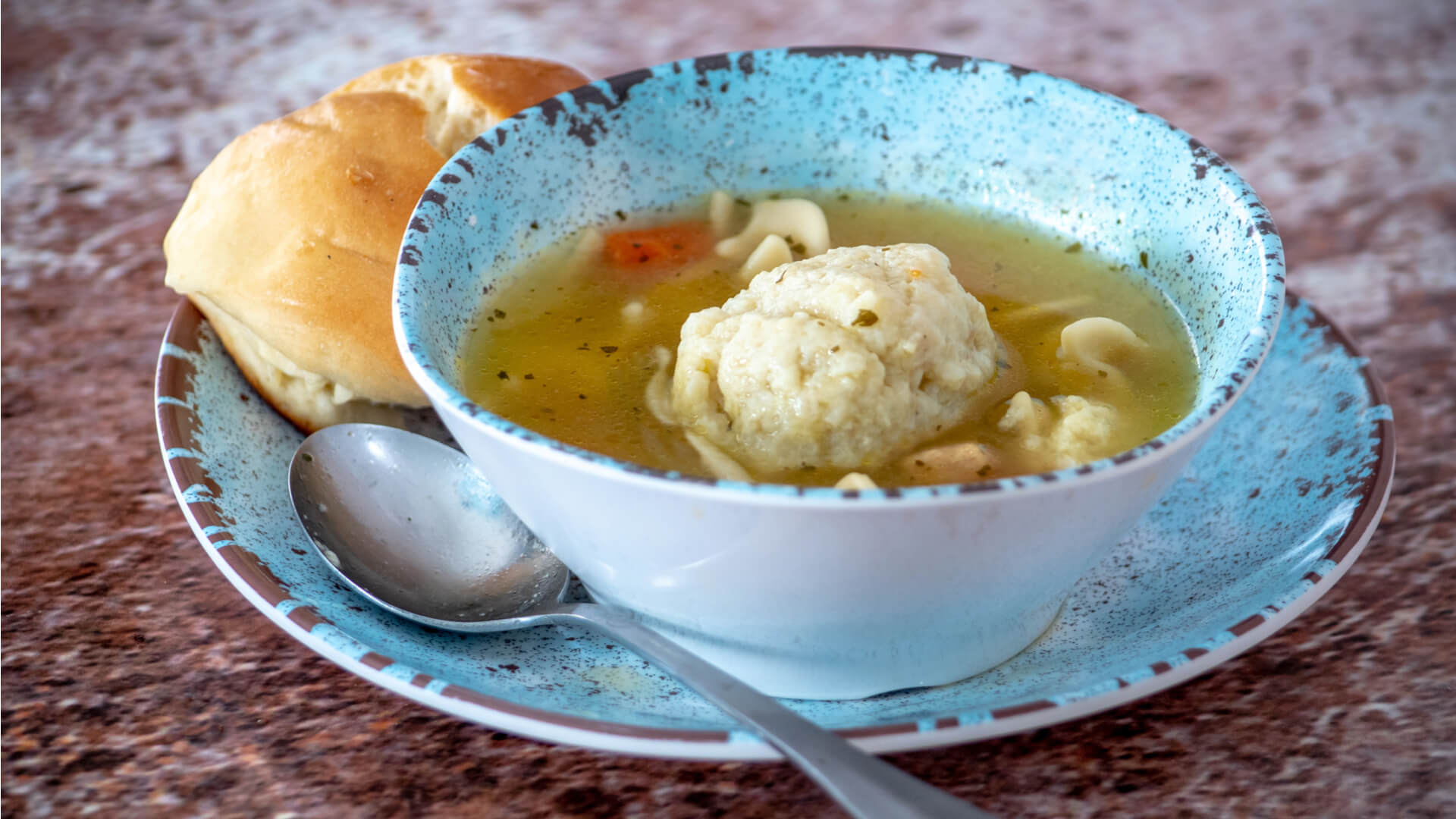 Chunky soups are stock based with the vegetables, meat or combination of both left in. A minestrone is a famous example of a chunky soup, and the Jewish Matzah ball soup is another way to create a tasty soup.

You can also call a chunky soup an unpassed soup, as the soup has not been strained of any chunks before serving.

What are Thick Soups?

Thick soups are soups that are thickened using flour, corn-starch, cream, vegetables, gelatines and other ingredients. Depending on how you thicken a soup, you can get different textures and flavours.

For example, a potage of boiled meat and vegetables results in a thick, mushy soup. Conversely, a bisque is thickened with rice, which creates a smoother soup. 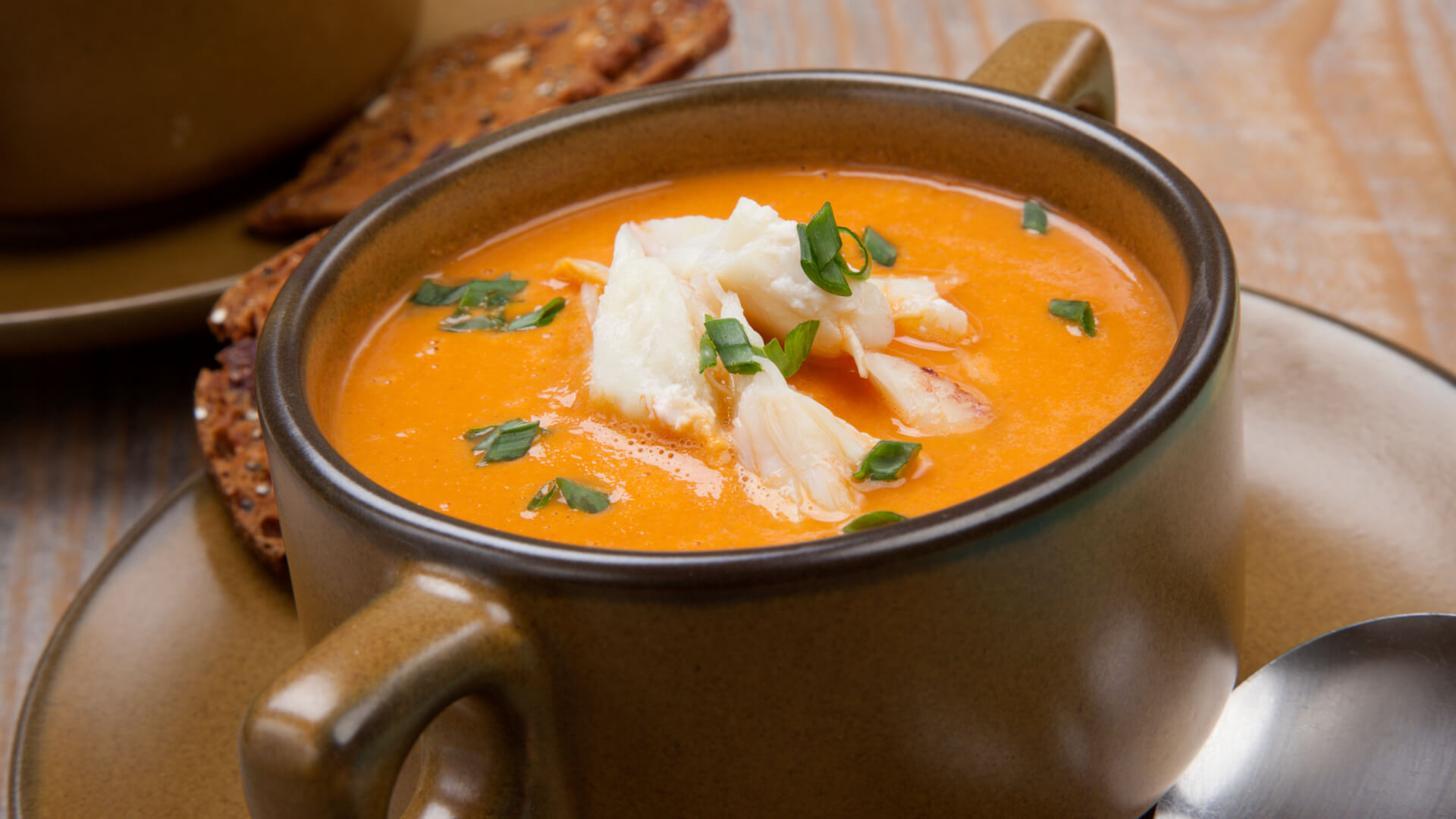 A bisque is a creamy, thick soup that includes shellfish. Bisque is a method of extracting flavour from imperfect crabs, lobsters and shrimp that are traditionally not good enough to send to market.

In an authentic bisque, the shells are ground to a fine paste and added to thicken the soup. Bisques are thickened with rice, which can either be strained out, leaving behind the starch or pureed during the final stages. 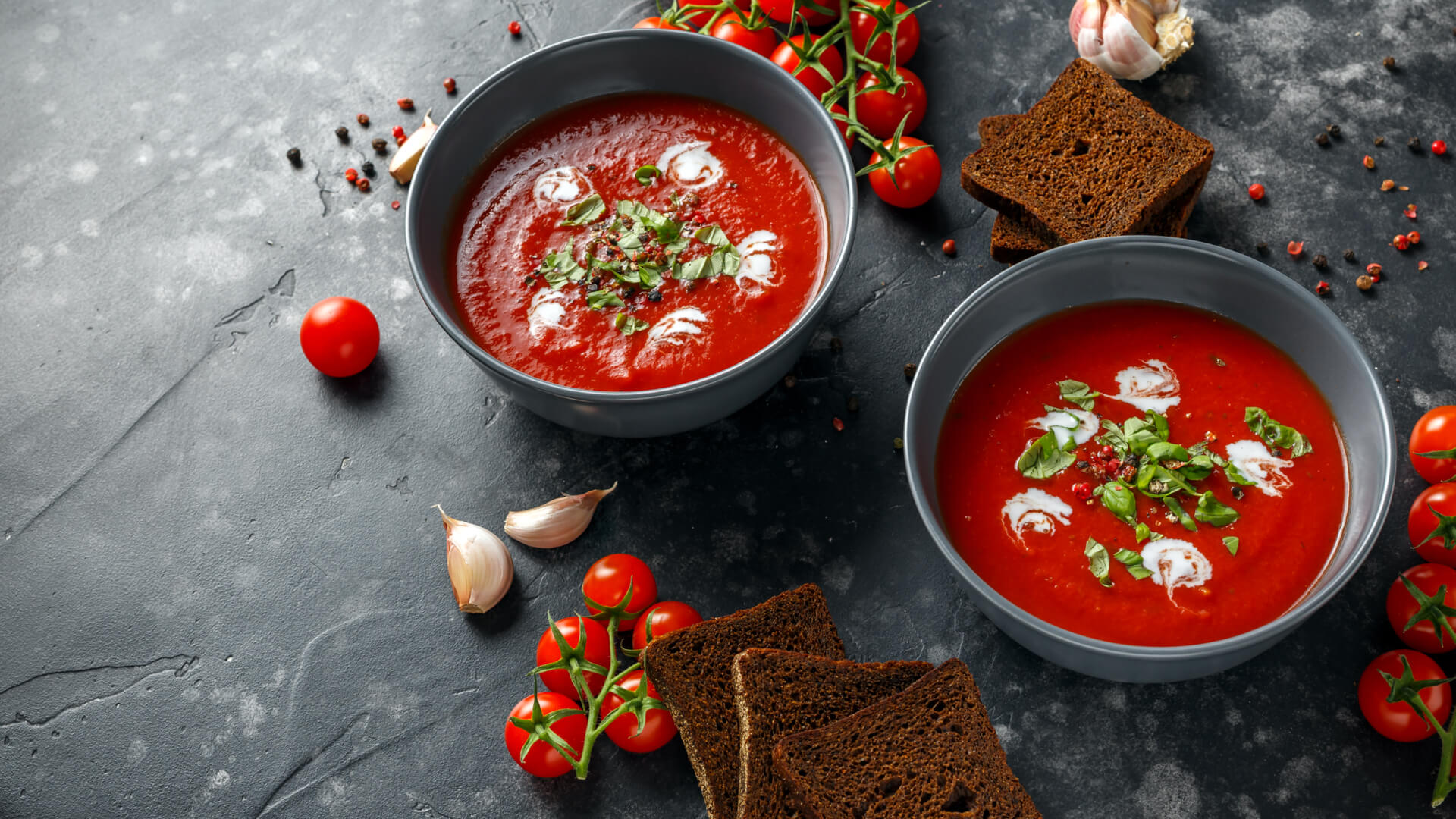 “Cream of…” soups come in a variety of flavours and are the main type of soup found in our Campbell’s Condensed Soup cans. Cream soups are traditionally a basic roux, thinned with cream or milk and combined with a broth of your preferred ingredient.

Typical flavours include cream of tomato soup, cream of mushroom soup and cream of chicken soup. The addition of cream creates a thick and satisfying soup that is filling and flavoursome. 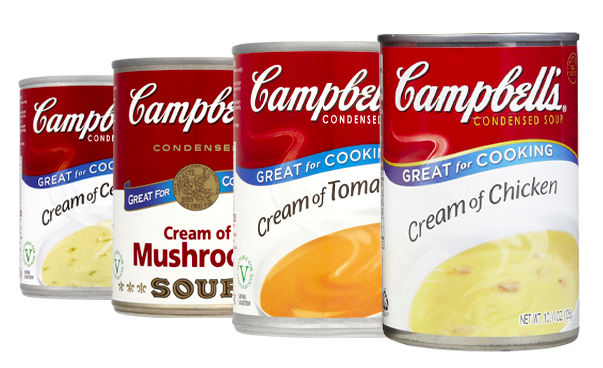 Condensed soups were created by Campbell’s back in 1897 by Dr John T Dorrance and have been a staple on shelves ever since.

It’s what we’re most known for, and across the world, cupboards are stocked with our condensed cream soups, and used as a standalone flavour, or as an ingredient in another recipe.

Condensed soups are made to be diluted with a can full of water, and the flavour and cream is packed into the smaller tin. This makes them much better for cupboard storage, while resulting in a tasty and rich soup.

A velouté soup is different from a cream soup, as the base of a velouté is a roux, rather than water. Velouté soups can be either meat or vegetable based, and when eaten, are a velvety texture, lending to the name velouté which translates from the French to mean ‘velvety’. 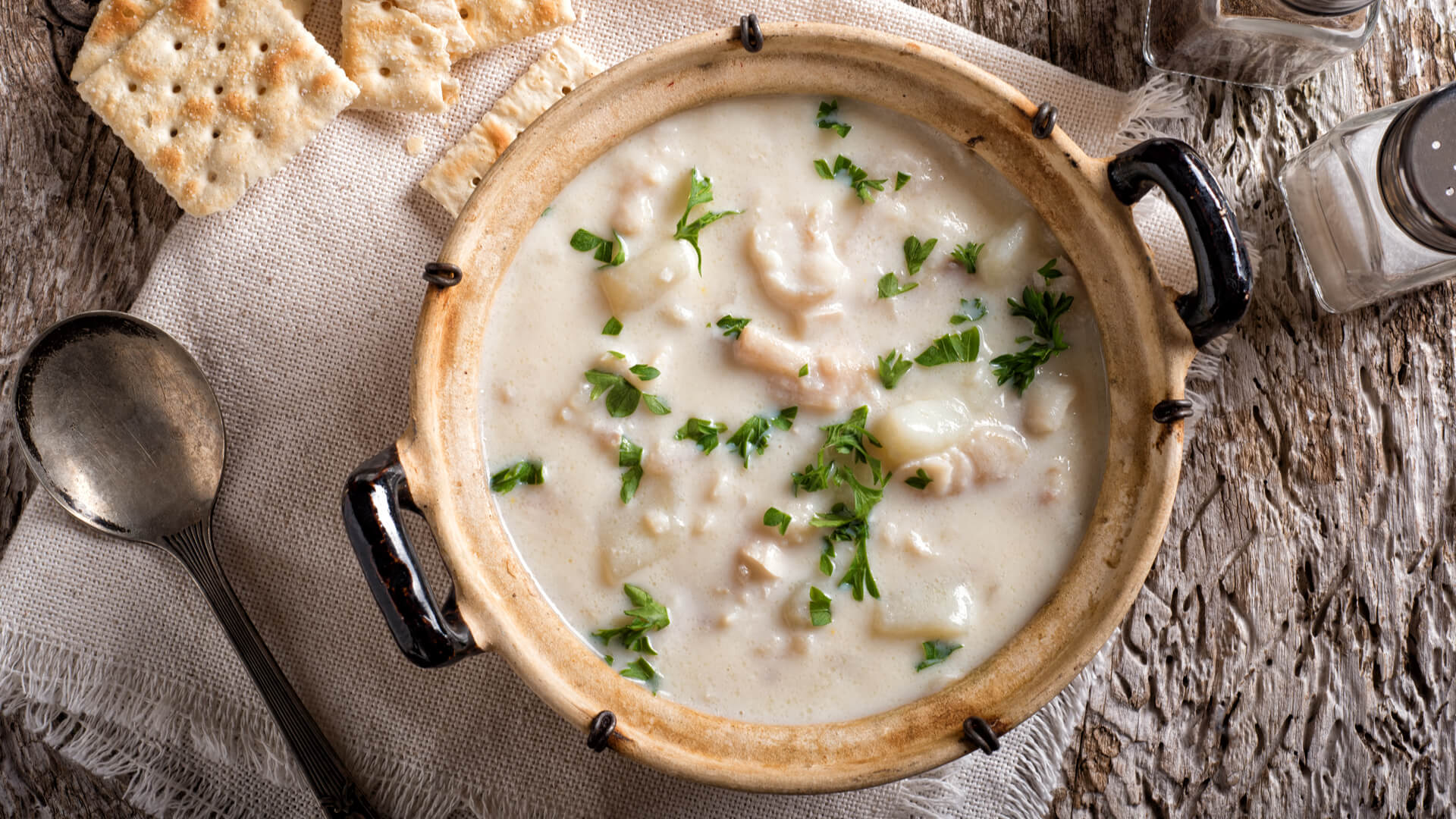 A chowder is most commonly associated with New England, and originating in America, with corn chowder and clam chowders being two of the most popular types.

Normally milky thanks to heavy creams or milks added, with unpureed seafood such as clams or clam juice also added.

They’re thickened with crackers or ships biscuits. Chowders quickly became popular seafaring food, as it was simple to prepare and surprisingly good despite the often lack of ingredients at hand. 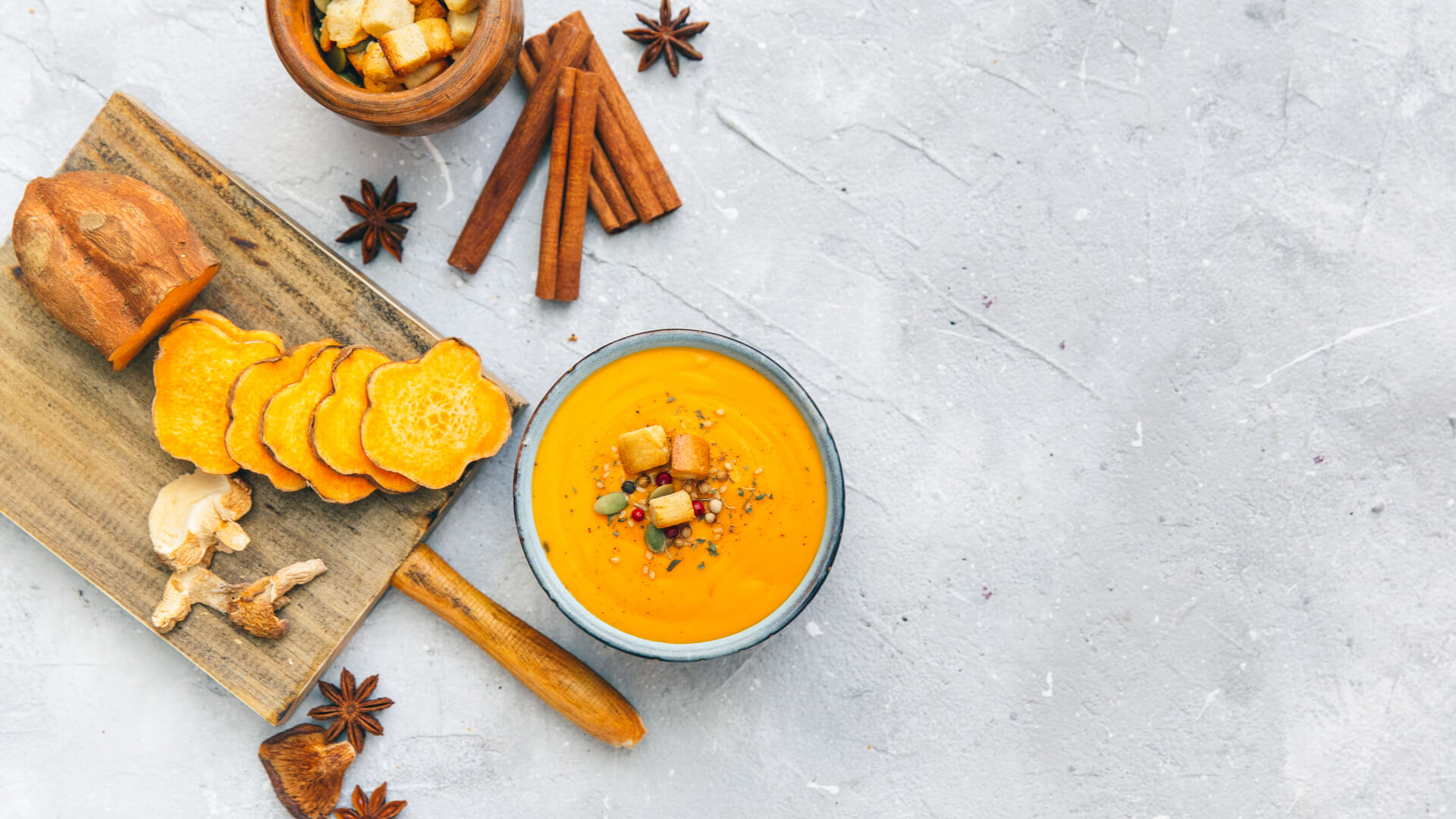 Potage is a Medieval soup from Northern France. To make potage, you take a variety of vegetables that you grow together in your garden add some meat and then boil it all together with water to form a thick mush.

Similar to potage is pottage. Pottage is an ancient thick soup made by boiling vegetables and grains. It was typically boiled for several hours until the entire mixture took on a homogeneous texture and flavour. It was intended to break down complex starches and to ensure the food was safe for consumption.

Probably the most commonly handmade type of thick soup, pureed soups are made by boiling vegetables together with a stock base, and then when soft enough, blending together to make a puree. While these can be cream-based, most pureed soups are often formed from a base of a stock cube, water, onions and a chosen vegetable, such as carrot or parsnip.

What are Cold Soups?

Cold soups are popular in some cultures, often those nearer the equator, as they provide a refreshing yet filling lunch or starter!

Gazpacho is probably one of the most well-known types of cold soup, but other cultures also have popular cold soups.

While you could have cold tomato soup, there are some soups designed to be had cold. 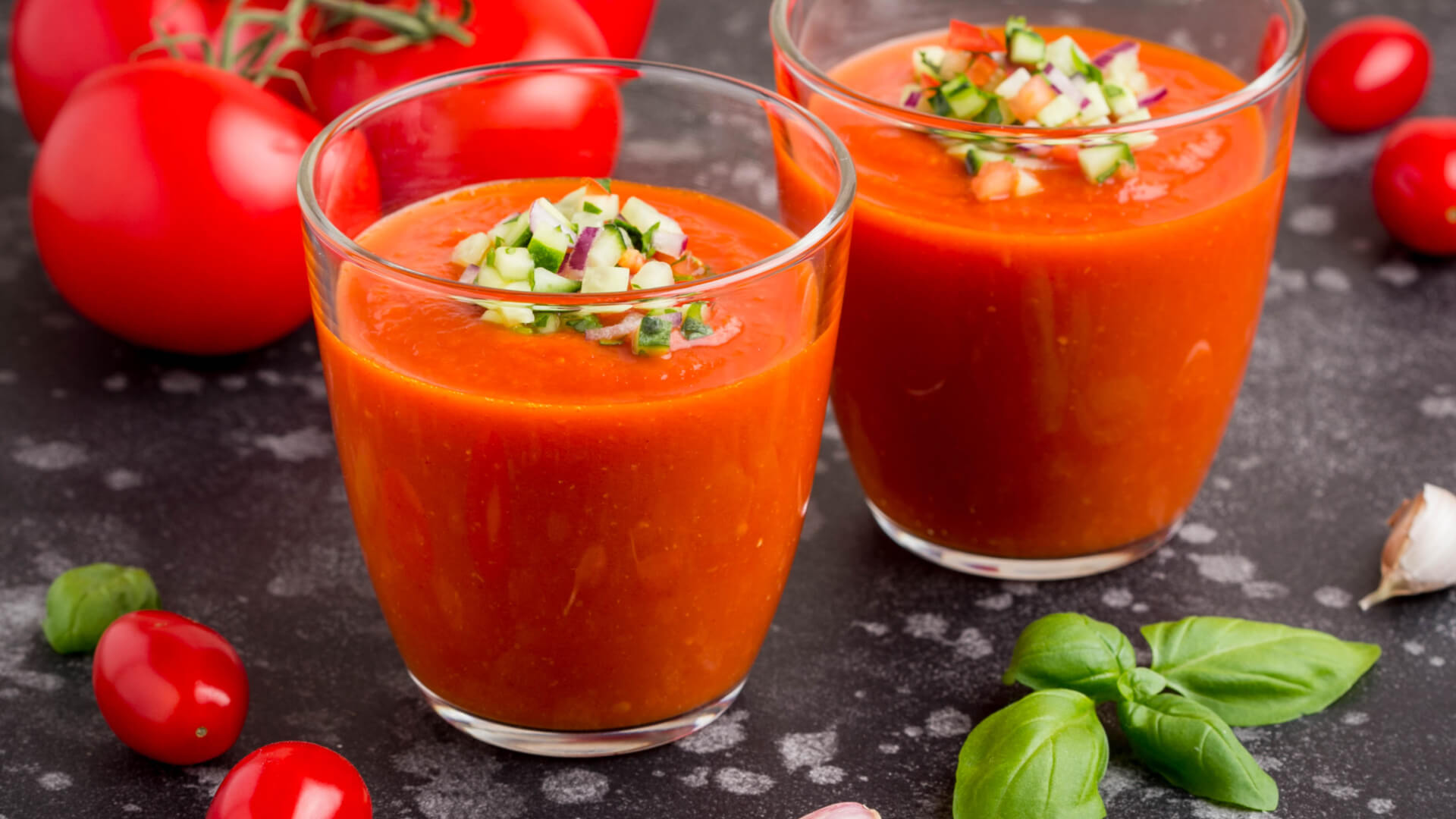 Gazpacho is a Spanish soup is made from vegetables in a tomato base. The tomato base is traditionally prepared in a pestle and mortar, and then chopped vegetables (such as cucumbers, onions and peppers) are added. 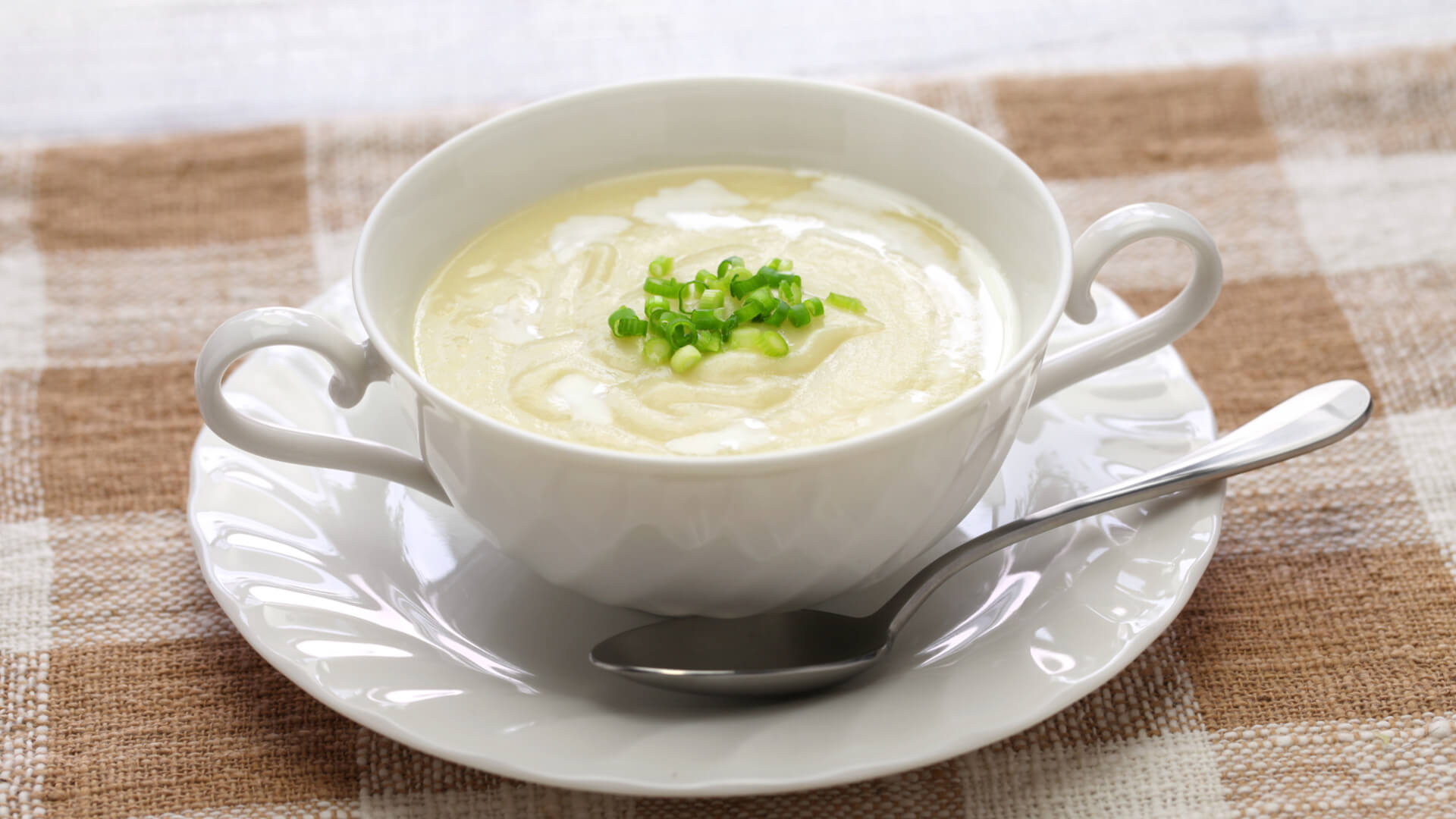 Vichyssoise is a traditional French soup made of cooked and pureed leeks, onions, cream, potatoes and chicken that is cooled down and served in summer. Revived by the Head Chef of the Ritz in 1917, Louis Diat, vichyssoise is now popular across the globe.

As soup has been part of so many cultures for centuries, different countries have developed their own kinds of soups, from the traditional Hungarian Goulash to Scotland’s own Cullen Skink.

There’s hundreds of different soups from all over the world and you could travel around the world just eating soup!

Along with clam chowder, we like to think that Campbell’s soups could be named one of the national soups of America, as we’ve been a cupboard staple for over 150 years.

Discover our soups in a supermarket near you, and have a lovely warm bowl of soup today.

Best Herbs to Go with Soup