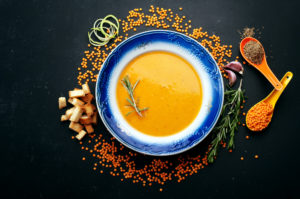 Soup has been a part of the UK diet since time immemorial and it is a staple on restaurant menus around the world. But how much would you really be willing to pay for a good bowl of soup? Would you be tempted to pay more for exotic or risqué ingredients or crazy cooking techniques?

If you answered yes, we have some eye wateringly expensive soups that might just pique your interest. Campbell’s have created a list of the words most expensive soups on earth.

The first is a soup of the day at the Norwood Chinese Restaurant in Australia. A single bowl of this broth costs $450 Australian dollars, £263, but the price may not be the only point of contention for diners interested in supping on this soup. To make the soup requires nearly a kilo of shark fins, an ingredient that draws objections from wildlife conservation groups around the world. The soup is made more expensive by the addition of 10 Abalone along with imported scallops and Chinese black mushrooms.

The second soup on our list is expensive, in part, because the customers said it should be. At the Taiwanese restaurant Niu Ba Ba, the chef Wang Congyuan actually asked his high profile clients how much they would be willing to pay for his beef noodle soup. The most common answer was 10,000 New Taiwan dollars. That works out to about £246. It took Wang 15 years to get his beef noodle soup recipe just right. He uses the best beef from Japan, Australia, the U.S. and Brazil. Wang even cuts each type of beef differently to make sure it cooks and serves perfectly.

What makes the soup even more expensive is the method used to cook the beef. Much of it is slow braised over 3 days. At the end of each day the meat is refrozen to let it rest. All in all the total cooking process takes about one week to prepare this costly concoction.

Our third entry into the list of the most expensive soups costs so much because of its ingredients and the legend behind the soups creation. At the Kai Mayfair in London, every bowl of Buddha Jumps Over the Wall soup costs about £152. This expensive soup got its name from a story about the soups creation. The tale goes that the soup was first made near a Buddhist monastery. The smell of the meat filled broth was so alluring that one of the Buddhist monks, who was bound by his religion to be vegetarian, jumped over the wall of the monastery to ask for a bowl of the soup. A poet later wrote that the soup was so good Buddha himself would have jumped the wall for a taste.

While Buddha may or may not have loved this soup, environmental groups are decidedly against it. The soup contains shark fin and abalone, both of which come with environmental and ethical baggage. It also takes two days to actually make this divisive delicacy and the recipe reads like directions for putting together a lunar lander.

The fourth and final bowl of soup has a price tag that blows all the other competitors out of the water, or broth if you prefer. With one bowl costing a bank account withering $5,000, £3,800, this Vietnamese Pho soup is probably the most expensive soup on earth. It is the creation of Tiato, a Vietnamese restaurant in California. They created the soup to auction off for a children’s hospital charity. The ingredients include A5 Wagyu beef, white alba truffles, foie gras broth and noodles made from rare blue lobster.

While these ingredients do sound incredible, they may not be enough to convince most people to part with over £3,000 in cash. What makes this particular dish even more costly is the fact that the £3,800 price is only a starting bid. As the soup was part of an auction, it may have actually been sold for far more.

If you are interested in more affordable fare, Campbell’s has a great range of soups to satisfy everyone. You can also check out our range of onsite recipes to learn how to add Campbell’s to some of your favourite recipes.